Throne of lols (my first tournament)

Hello again fellow bloggers,
It's a bit late but I thought I'd share my experience of my first tournament and "competitive play.
Firstly I'd like to thank the organisers and the players for making the event such a good weekend.

After meeting some old friends and a lot of new ones at the "surprised" local coffee shop we rolled up about 9 am for the briefing we got stuck in: 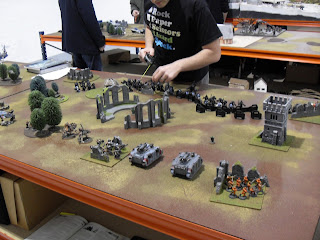 The game went to four turns before we called time, it was Le first game since the mid 90's so we took it easy and explained the rules as we went along.
lee's force was 4 Terminator led squads of Greyhunters a Terminator Rune Priest with support from two squads of Missile Longfangs. 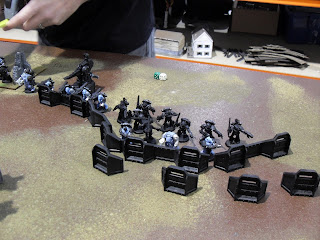 The game was was a general troop ruckus which was rudely interupted by my Thunderwolf Lord and chum smashing up two 10 man squads of Greyhunters! he passed  40 odd 2+ saves in the end!

The game was a win 7-5 on victory points 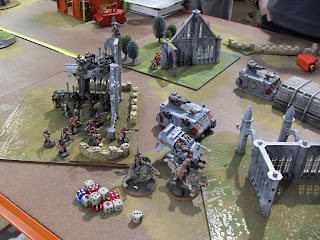 This game was a lesson in power gaming and just how lethal a real tournament list can be, the deployment forced me into a narrow channel against Adams Warwalkers, Vypers, Wave Serpents and Dire Avengers and Fire Dragons. 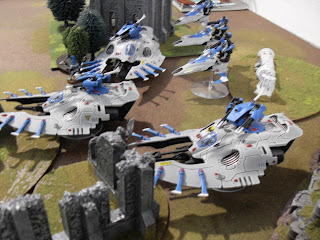 He Alpha striked me by picking off the vehicles and Thunderwolves and preceded to focus fire on each threat as it arose reducing me to a husk in 6 turns. 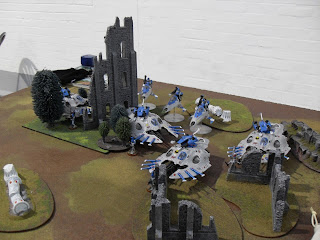 Facing 72 strength 6 shots a turn is a real eyeopener! all I can say is ouch, ouch, ouch! 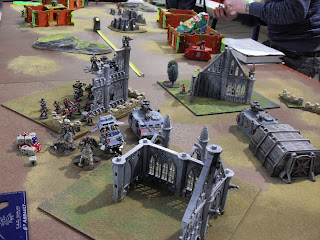 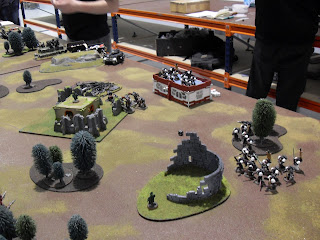 Dan's army was Terminators with 2 Assault Cannons and Marshall, two squads of Bretheren and a brace of Predators. 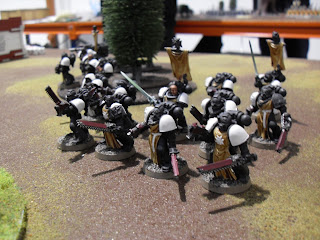 This game was dominated by a big smackdown with the Terminators and Thunderwolves with some late game grabs of the objectives by Dan . 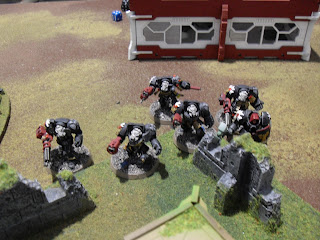 The game was loss 6-1 after 6 turns, a note is don't mess with an Emperors champion he is not nice! 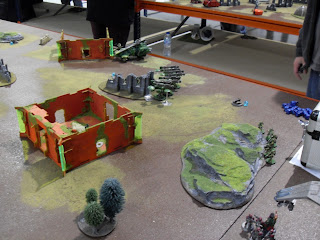 Luke's force was 2 small squads of Firewarriors with a Ionhead and two Broadside teams and two Battlesuit teams with a Commander. 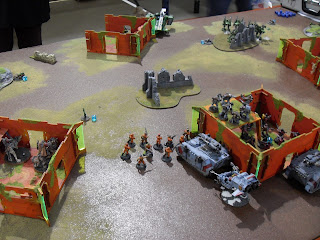 This was one of the best games of the weekend, it was a really tight game of careful maneuvers by the Tau and the Wolves, I was slowly learning to use the Guardsmen offensively especially once the Rune Priest casts a 4+inv save on them!
Eventually the game was a win 8-5 but had the game run to turn 6 it would have flipped to some thing like 11-3 loss, Luke was poised to obliterate me off the objectives...phew! 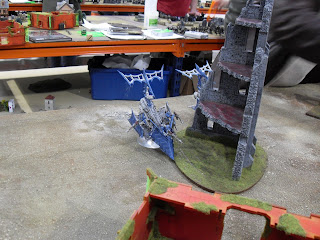 I confess I'm not too sure on Shawn's armylist but it was all mechanised with two units of troops and Archon with Nasty ap2 chums! 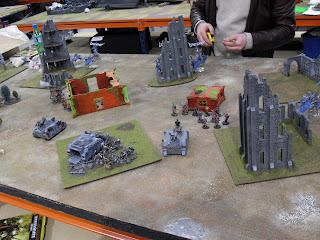 This game was dominated by rediculous shooting once again, loads of str5 ap2 twin linked shots make a mess of things fast!
Highlight was some Veterans grenading a vehicle to bits, way to go chumps!
In the end the game was Draw 5-4 Shawn got an extra secondary point to technically win. 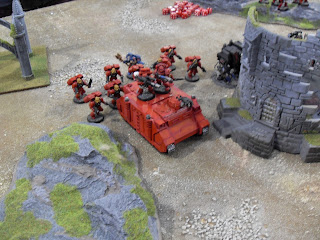 Alex's force was Assault troops, Death Company and a Death Company Dreadnought,Storm Raven and Chaplain (special character who I can't remember his name whoops) and a rather lucky Librarian. 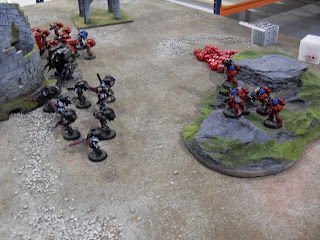 Alex stormed forward and secured the Relic whilst his Dreadnought sliced into my right flank with its Blood Talons, meanwhile the Thunderwolves tore into his right flank.
The center was a huge gunfight and melee with everyone piling into one huge brawl. 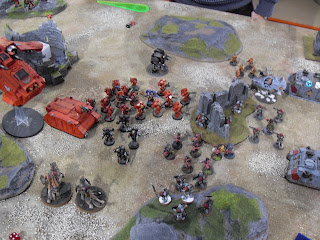 The Blood angels managed to get the Relic 6" from the center by games end the Librarian had the objective he had rolled Scoring unit as his warlord trait, I was all set to Lascannon him to power with my Valkyrie but the pesky Stormraven stopped it shooting...gah!
Game ended a loss 4-1 but so close.

All in I placed 9th out of 12, not too bad for my first foray into tournaments.

I learnt to play more aggressively, the smallest unit or the seemingly weak model can really change the game.